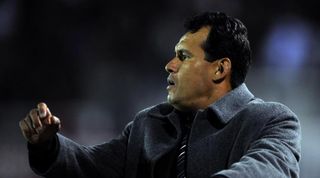 With four wins in as many Clausura matches, Melgar were in hot form heading to the Estadio Heroes de San Ramon – only for UTC Cajamarca to claim a surprise 2-0 victory.

Cesar Valoyes and Mauro Vila were on the scoresheet for the league's seventh-placed side against Juan Reynoso's men.

Valoyes opened the scoring in the 26th minute before Uruguayan Vila wrapped up the points late in the second half.

Universitario remain three points adrift of Melgar, who stayed top, after a 2-0 loss at Union Comercio.

The hosts were on top throughout the first half, even before Universitario were reduced to 10 men when Cris Martinez saw red.

Cristian Bogado finally gave Union Comercio the lead in the 75th minute with a neat finish before Jose Ayala headed in a second.

Ayala's goal came after Universitario shot-stopper Jose Carvallo had inexplicably come charging off his line trying to clear a ball he was never going to get to.

Raul Ruidiaz was also sent off for the visitors after a dangerous tackle in the closing stages.

Alianza Lima rose to second, staying unbeaten thanks to Mauro Guevgeozian's brace in a 2-0 victory at home to San Simon.

Fifth-placed Leon de Huanuco are the only other side yet to lose, but their clash against Cesar Vallejo was postponed due to the latter's involvement in the Copa Sudamericana.

Winless Inti Gas earned their fourth draw of the season with a 0-0 result at Los Caimanes during which both teams were reduced to 10 men.

Sporting Cristal and Real Garcilaso played out a 1-1 draw and Juan Aurich battled to a 1-0 victory at Sport Huancayo.

Luis Perea's second-half brace was not enough for Universidad San Martin as they went down 3-2 at Cienciano.