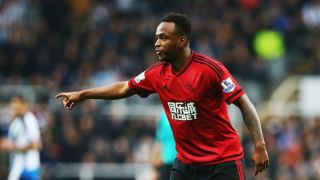 Saido Berahino will be given another chance to prove his worth to West Brom, with Tony Pulis set to start the striker in Wednesday's FA Cup fourth-round replay at Peterborough United.

League One Peterborough twice battled back from a goal down to secure a 2-2 draw at The Hawthorns in the initial tie – Shaq Coulthirst and Jon Taylor on target to cancel out Berahino's brace.

Berahino has not started a Premier League game since October, due to a reported falling-out with head coach Pulis.

The former England Under-21 striker struggled to make an impact as a half-time substitute at Newcastle United on Saturday, but Pulis hopes that Berahino can benefit from an altered training regime sooner rather than later.

"He's been doing a lot of weights so he looks a bit..," Pulis mused. "He's definitely stronger than he was before when he was out of the team.

"He'll definitely play at Peterborough then we'll see how he is. He'll play a part at Everton [on Saturday] then hopefully with a good week's training he'll get some of his sharpness back that we need in front of goal.

"He's missed a lot of games obviously. He's missed half the season. We're desperate to get him back involved again and playing games - being part of the team and he needs that game time."

Peterborough paid a hefty price for their 1-0 win at Chesterfield on Saturday, as Michael Smith and Ricardo Santos collected second bookings after half-time.

Smith and Santos will serve suspensions against West Brom but the nine men held out with the help of 79th-minute substitute Gabriel Zakuani – the Democratic Republic of Congo international making his first appearance since November after hamstring surgery.

Manager Graham Westley must make a call on whether to pit Zakuani against Berahino and was full of praise for the 29-year-old's courage.

Westley told Posh TV: "It's incredibly really, what Gaby has done. Everybody told me what he was like as a character – I don't think I really needed to come to the club to find out.

"He's come back two months earlier than a Premier League player who's had the same operation. He's two months ahead of his schedule and he's forced himself back into the reckoning.

"He shouldn't be out there. He had his first full training session on Friday. I was touch and go about putting him out there but I'm glad I did."

Fellow defender Jack Baldwin is also in a race to be fit after suffering a back injury in the initial tie, with Westley saying his player had been sent for "special treatment".