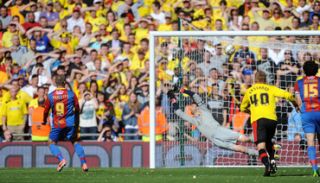 Former Watford and England forward Phillips, 39, secured Palace's promotion to the top flight when he drove his spot-kick high into the net in the 105th minute after Manchester United-bound forward Wilfried Zaha was brought down by Marco Cassetti.

"It was a case of fourth time lucky for me in a play-off final because I lost my previous three," substitute Phillips told Sky Sports television.

"It's an amazing feeling. To come on and score the winning goal against the club where it all started for me 20 years ago is a fairytale."

Victory was thoroughly deserved for Ian Holloway's Palace as they dominated the game that analysts estimate is worth 120 million pounds to the winners.

Man-of-the-match Zaha was a constant threat in attack and he gave a performance that showed why United have already agreed a deal to sign him at the end of the season.

The first half was a cagey affair with few efforts on goal although Palace midfielder Mile Jedinak was lucky not to receive a red card for elbowing Nathaniel Chalobah.

It was much livelier in the second period and England international Zaha had a good chance to open the scoring when he burst through on goal. But he delayed his shot and it was eventually blocked.

Watford's Manuel Almunia then made four excellent stops to keep out Palace who were rescued from administration three years ago.

The former Arsenal keeper kept out a low strike from Stuart O'Keefe before denying Aaron Wilbraham at point-blank range.

Almunia then saved well with his feet from Wilbraham after 83 minutes before making a flying stop to keep out Jedinak's header from a corner.

Gianfranco Zola's Watford were first to threaten in extra-time when keeper Julian Speroni went full stretch to keep out Troy Deeney as the Palace striker looked set to score.

Phillips then made the breakthrough for Palace who finished the regular season in fifth place while Watford were third.

Zola's side refused to give up and Fernando Forestieri had an effort headed off the line in the closing minutes before a deflected attempt on goal went narrowly wide seconds later.

"We had a tough few weeks before the play-offs, people were disappointed not to get in through automatic promotion, but this is absolutely massive for the club," said Holloway.

"We will fight to try and keep as many of our big players as we can but as for Wilfried Zaha, he's got us into the Premier League and I couldn't care less about anything else right now."

Former Italy and Chelsea forward Zola acknowledged his side were not at their best.

"This is tough for everyone connected with Watford," he said. "We didn't play our best game but to lose to a penalty in extra-time is hard to take.