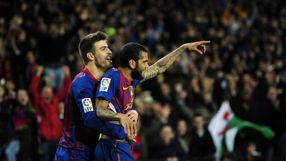 Barcelona should have defenders Gerard Pique and Daniel Alves available for Saturday's match at fourth-placed Levante after the pair were declared fit and returned to full training on Friday following minor injuries.

Midfielder Seydou Keita worked apart from his team mates due to a thigh problem and is unavailable, Barca said on their Twitter feed.

The champions, who have six matches to close the four-point gap with leaders Real Madrid, are seeking an 11th straight league win at Levante's Ciutat de Valencia stadium.

Real, who host Sporting Gijon on Saturday and play at Barca's Nou Camp stadium a week later, will be without Xabi Alonso at the Bernabeu after the Spain midfielder collected a fifth yellow card in Wednesday's 4-1 win at Atletico Madrid and earned an automatic one-game suspension.

Alonso's absence could open the way for Esteban Granero, Lassana Diarra or Nuri Sahin to start alongside Sami Khedira in central midfield.

Barca's talismanic captain Carles Puyol, who turned 34 on Friday, is enjoying one of the best runs of form of his career and has already netted his best tally of goals in a single season with two in the league and two in the King's Cup.

Barca have told the shaggy-haired Spain centre-back's agent they want to offer him a contract extension beyond June 2013 when his current deal expires and the club are hoping he will end his career at the Nou Camp, daily Sport reported on Friday.

Real forward Cristiano Ronaldo can break his own La Liga record of 40 goals in a season set last term with a goal at the Bernabeu on Saturday.

The Portuguese international netted a hat-trick at Atletico that took his league tally to 40, one more than Barca forward Lionel Messi, who has 61 in all competitions compared with 52 for Ronaldo.

Ronaldo will be suspended for the 'Clasico' against Barca if he is booked in the Gijon game but assistant coach Aitor Karanka, standing in for Jose Mourinho, said on Friday the club were not concerned.

"Cristiano has been playing for two months with four yellow cards and there is no problem," Karanka told a news conference.

Real have amassed 104 goals in their 32 league games this term and are closing in on the Spanish record of 107 the club set under Welsh coach John Toshack in the 1989/90 season.

"It's easy to say it but it's not easy to do it," Toshack, currently in charge of Macedonia, was quoted as saying in Friday's edition of Spanish sports daily Marca.

Third-placed Valencia play at Espanyol on Sunday having taken just five points from their last five matches and their lead over fourth-placed Malaga, who host