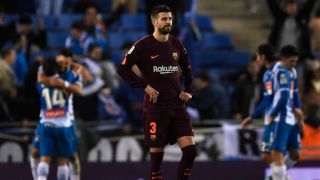 Gerard Pique has called for better behaviour from fans in the second leg of Barcelona's Copa del Rey tie with Espanyol after some unsavoury incidents in Wednesday's match.

Barca suffered their first defeat since August as Oscar Melendo gave Espanyol a 1-0 win over their city rivals at RCDE Stadium.

The visitors' frustrations were exacerbated by their treatment at the hands of some of the home supporters, with goalkeeper Jasper Cillessen apparently struck by an object thrown from the crowd and Pique having been taunted by chants aimed at him and partner Shakira.

The centre-back hopes not to see a repeat of those incidents in the second leg of the quarter-final tie next week.

"I'm not the one who should rail against that issue," said Pique. "We know already playing Espanyol at Cornella is difficult. I hope that all that does not happen at Camp Nou: nobody should be insulted and things should not be thrown onto the pitch."

The defeat was Barca's first since their 2-0 second-leg loss to Real Madrid in the Supercopa de Espana - a run of 29 matches in all competitions - and came after Lionel Messi had missed a penalty in the 62nd minute.

Pique, however, was upbeat about their chances of turning the tie around.

"When you lose, you always look for explanations, but the team competed well," he said. "The missed penalty was something that can happen and the truth is that the game did not go how we want, but if I had to choose a defeat, I'd choose this.

"It doesn't hurt to lose our streak here. The penalty miss may have affected us too much but at the Camp Nou we will have our chances. It can be turned around next week."

3 - Lionel Messi has missed more penalties than any other La Liga player this season in all competitions (three from six attempts). Strange. January 17, 2018