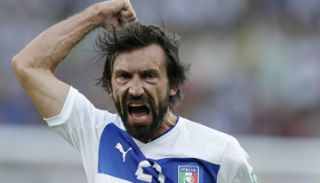 The notoriously difficult to please Maracana crowd was united in its adulation of the 34-year-old, appreciating the sort of player their own country has struggled to produce and even shunned.

Pirlo's role as a deep-lying playmaker is an alien concept in Brazil, where any midfielder who sits just in front of the defence is expected to perform a purely destructive role.

Most Brazilian teams, including the national side, field two "guard dogs" in front of the back four, whose job is to snuff out danger and stop anything that moves, by fair means or foul.

Tactical fouls, such as a tug of shirt or sneaky trip, are considered perfectly acceptable by such players, while venturing forward and helping the attack remains taboo.

At the 2010 World Cup, coach Dunga used the brute force of Gilberto Silva and Felipe Melo in the centre of midfield, which gave plenty of protection to the defence but limited Brazil's creative options, putting most of the burden on a half-fit Kaka.

Mano Menezes, who took over after the tournament, was more adventurous, and encouraged all his midfielders to attack but when he was sacked and replaced by Luiz Felipe Scolari in November, there was a quick return to the old approach.

"I don't go with this story that the defensive midfielders have to go forward all the time and try and score goals," Scolari said shortly after taking over. "What we have to do is not concede goals."

"I don't want my central defenders to be left in one-to-one situations, I'm not going to let it happen."

Brazilian critics believe that Chelsea midfielder Ramires has been left out of the Confederations Cup because he likes to charge forward, while Lazio's Hernanes has been relegated to the substitutes bench for the same reason.

Scolari made it clear after the 2-2 friendly draw against England at the start of June that he was not happy with his team's performance after Hernanes came on at half-time, even though he set up Brazil's first goal.

It would be fascinating to know what Scolari makes of Pirlo and Italy, where Daniele De Rossi was the only player in their five-man midfield who could be considered a tackling specialist.

Italy were certainly exposed to Mexico's attacks in Sunday's match but that was more than compensated for by the number of openings created.

Pirlo's team-mates are in no doubt about the qualities of a player who gave Italy a 27th minute lead against the Mexicans.

"When you see Pirlo in action it's hard not to sit back and enjoy it. I know how that feels because I've been watching him for years," goalkeeper Gianluigi Buffon told FIFA.com.

"To cap it all, he topped it off with a pearl of a free-kick and when you put it all together, it's only natural to end up getting the crowd's support."

Defender Giorgio Chiellini said there was nothing better than to have to option of giving the ball to Pirlo.

"As a defender and a team-mate of Andrea's in the national side and at Juventus, I couldn't ask for anything more in this life,"