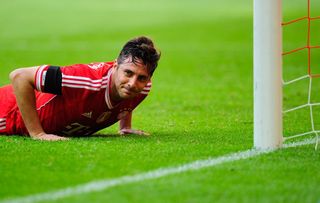 The Bundesliga champions suffered a 1-0 loss in Madrid in the first leg of the UEFA Champions League semi-final, and host the La Liga giants on Tuesday.

Bayern prepared for the return leg with a come-from-behind 5-2 win over Werder Bremen, but their defensive problems were highlighted.

Both goals Bayern conceded were on the break, and Pizarro said the same mistakes would be just as costly against Real.

"We conceded two goals via counter-attacks in the first half. We can't afford to let that happen against Real, so we'll have to be on our toes," the Peruvian said.

"We played well in the second half and managed to score the goals to win the game. It was important that we won the match today and I hope we can do the same on Tuesday."

Pizarro struck a brace to go with goals from Franck Ribery, Bastian Schweinsteiger and Arjen Robben.

Bayern attacker Thomas Muller preferred to look ahead, with his team focused on the UEFA Champions League having sealed the Bundesliga title in March.

"I don't want to go into great detail about our win today. It's all about Tuesday's match for us, and we need all the support we can get from everyone at the club," he said.