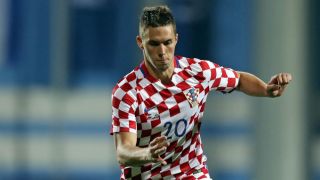 Marko Pjaca has bid an emotional farewell to Dinamo Zagreb ahead of his final game for the club as the winger closes on an expected move to Juventus.

The 21-year-old impressed at Euro 2016 for Croatia and was quickly linked with a move to Serie A, with Inter and AC Milan credited with an interest.

Champions Juve soon emerged as front-runners, though, and the player's representative Marko Naletilic claimed a deal was close last week, with reports suggesting the Turin club have agreed a €25million fee.

Pjaca has now confirmed that his final appearance in a Dinamo shirt will come in Wednesday's Champions League second round of qualifying second-round tie against Vardar in front of home support at the Stadion Maksimir.

"I would like to say that on Wednesday I will play my last game for Dinamo," he told the club's official website.

"This is my club that I have cheered since the day I was born. I am grateful to Dinamo for everything.

"I am happy because I am waiting for a new challenge, but sad because I'm leaving the club that I have cheered for as long as I can remember.

"What is important and I what I want to emphasise to the great Dinamo fans is thanks for everything, it was beautiful and a dream come true to play at the Maksimir Stadium and win trophies, but it was time to part."