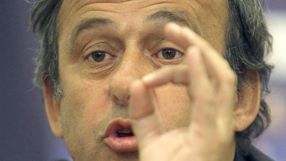 "I always tell the players to be very careful," Platini told a news conference on Sunday. "They should know they'll never play football again if they're caught in the act.

"I'm telling them - play poker or go to the casino and or play some other gambling game but don't try to fix matches."

Platini reiterated that UEFA would take a zero-tolerance approach to what he has previously described as the biggest scourge facing the game.

"I'm not a policeman and I'm not a judge, who fights with the mafia," he said.

"I know we must defend football. You know that UEFA's executive committee and congress declared zero tolerance for corruption.

"We can't convict a person who has agreed to fix a match," Platini added. "This is not our function. But we're pushing to solve this problem.

"We gave 7.5 million euros to each of the national football associations recently to combat the problem and I can tell you that they'll receive 9.5 million euros each between 2012 and 2016."

During his two-day visit, Platini met Bulgaria Prime Minister Boiko Borisov to discuss the Balkan country's bid to host the European Under-21 championship finals in 2013.

"Bulgaria is ready to host the championship," Platini said.