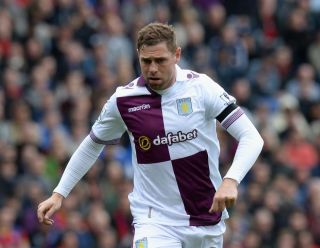 The Villa Park faithful once more voiced their disapproval of Lambert's stewardship in Saturday's disappointing 4-1 defeat at Swansea City.

That setback saw Villa's winless run in the Premier League stretch to six - of which five have ended in defeat - and the poor return has left Villa sweating on their Premier League status, with just three points separating them from 18th-placed Norwich City.

However, on-loan striker Holt has moved to defend Lambert and believes it is the playing staff that should shoulder the blame for their dismal run.

"I think it's fair to give the players a bit of stick," he said. "The manager has put a team out there to perform and we have not got the points.

"As a group of lads we have got to take the flak and stick for that as we have been beaten 4-1 away from home. We are not in a good vein of form at the moment and we are giving away cheap goals.

"It's always the way when things are going against you that people look at the manager. But we deserve the stick.

"The belief among the players is still there. We have already had a chat and we just have to put this one to bed.

"We have got three games left and they are all big ones. But it's still in our hands."