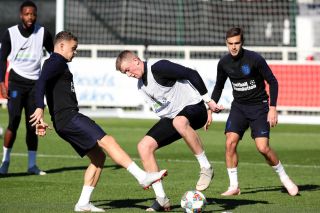 Gareth Southgate’s tough selection calls will make players who missed out the Nations League “fired up” to prove themselves again next season, according to former England defender Viv Anderson.

Tottenham duo Kieran Trippier and Harry Winks were not included in the final 23-man squad for Portugal, while Southampton pair Nathan Redmond and James Ward-Prowse also missed out in what Southgate admitted were difficult choices to make.

Rather than be discouraged, though, Anderson believes the healthy competition for places will drive everyone on for continued success as England look to maintain momentum from the World Cup all the way to Euro 2020.

Stepping up the intensity ahead of the #NationsLeague finals ⚽️ pic.twitter.com/NQf8z07I4U— England (@England) June 3, 2019

“The manager has found a formula which suits him, and I think he will have explained to guys like Kieran and anyone else he had to leave out the reasons behind it,” said Anderson, who was the first black player to earn a full senior England international cap 40 years ago.

“Most people will understand it and they will get themselves fired up by it, to make sure they get themselves back into the next squad and then again in the one after that.

“It is the fight for places which everybody wants – we don’t want the same people knowing they can just get in even if they have had a mediocre season or whatever. We want to give challenges to all positions.”

Former full-back Anderson won the European Cup twice with Nottingham Forest before joining Arsenal in 1984, later becoming Sir Alex Ferguson’s first signing at Manchester United as well as then having spells with Sheffield Wednesday and Barnsley.

The 62-year-old, capped 30 times and in two World Cup squads, believes call-ups for the likes of Redmond and Ward-Prowse shows Southgate will reward consistent domestic form – no matter at which club.

“Guys like (Bournemouth striker) Callum Wilson, the lads at Southampton – James Ward-Prowse and Nathan Redmond, all at so-called unfashionable clubs, it (being called up) is a great example to any English players in the Premier League,” said Anderson, who will be taking part in Prostate Cancer UK’s Football to Amsterdam bike ride from June 7 to 9.

“They are young, hungry and enthusiastic players who want to do well.

“If Gareth can look at it, put one or two in to freshen it up, then why not?

“It gives them an opportunity to show what they can do at the top level.”

– Viv Anderson will be taking part in Prostate Cancer UK’s Football to Amsterdam bike ride for a fourth time on June 7-9. For more information, visit prostatecanceruk.org/amsterdam or sponsor Viv at www.justgiving.com/fundraising/viv-anderson5