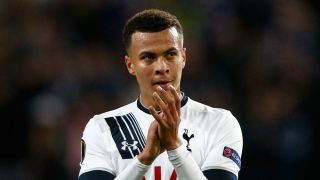 Mauricio Pochettino has defended PFA Young Player of the Year Dele Alli after the midfielder was handed a three-game suspension for punching Claudio Yacob in Tottenham's 1-1 draw with West Brom.

Alli's offence was not spotted by the match referee but he was banned after cameras picked up on the incident, with the suspension subsequently ruling the 20-year-old out of action for the rest of the season.

Tottenham face Chelsea on Monday, but if Leicester City win at Manchester United on Sunday the Premier League title race will be decided in favour of the Foxes.

Pochettino, who on Friday announced he has verbally agreed a new contract tying him to Tottenham until 2021, insisted Alli must learn from his error.

"Like everyone, the player can make a mistake. It was an action that nobody feels proud of but it's only one mistake, a small mistake," the Argentinian said.

"He should pay for that and learn from it. There are many reasons why something like this can happen on the pitch, but there is nothing more to say.

"He is a very strong character and personality and it is for that reason that he is one of the best players in England. We cannot change him. We all make mistakes and he made a mistake."

"I've spoken to him and he said the punch wasn't below the belt so he took quite well," Pulis said. "Claudio didn't roll around, didn't make a meal of it, just got on with it.

"When you see some players, English players as well as South American players, falling around and rolling around at times when they've not been touched, I don't think he's taken the credit he deserves. He didn't make anything out of it."

Although Alli cannot play in any of Tottenham's three remaining Premier League games, Pochettino confirmed the England international will continue to train as normal.

"It's very important he keeps a high level of performance because he will be selected for the Euros," Pochettino said.

"In the next few weeks he cannot play, but he needs to work maybe a little bit more to keep his physical condition."