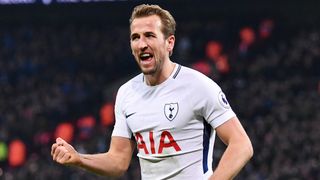 Mauricio Pochettino believes Harry Kane is going to break all of Tottenham and England's goalscoring records after he earned a piece of club history in Saturday's 4-0 victory over Everton.

This season has already seen Kane surpass Alan Shearer's mark for the most Premier League goals in a calendar year with 39, while also finishing 2017 with more than Lionel Messi and Cristiano Ronaldo.

And he became Tottenham's leading Premier League goalscorer with his 97th and 98th top-flight goals for the club, moving past Teddy Sheringham with a brace at Wembley.

Speaking to BT Sport afterwards, Spurs boss Pochettino said: "He's so talented, so professional, I am very happy. I congratulate him, he deserves the credit.

"In this way he's going to break all the records in the Premier League and England. I'm so happy, it's fantastic because he helps for the win."

Jimmy Greaves is Tottenham's record goalscorer in all competitions with 266 and Pochettino is pleased Kane has a long way to go before he breaks it.

He added: "That is far away, but that is good because otherwise he breaks a record every week."

Tottenham are now level on points with fourth-placed Liverpool and only three behind Chelsea, the defending champions having been held to a 0-0 draw by Leicester City that denied them the chance to move above Manchester United in second.

"It's so important to be there, fighting very close. Three points is the gap to Chelsea and United, and Liverpool. Of course, they [Liverpool and United] play tomorrow and Monday," Pochettino said.

"But there's a long way to go until the end of the season. We need consistency until then to show we're fighting for the top four."