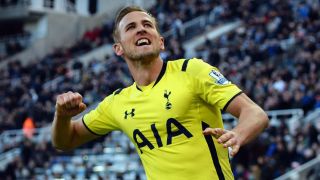 Nacer Chadli's opener was cancelled out by Jack Colback with Christian Eriksen restoring Spurs' lead at St James' Park before Kane sealed the victory late on.

In finishing off a quick counter-attack, Kane became the first Tottenham player to reach the 30-goal mark in a single season since Gary Lineker in 1991-92.

It was Kane's first goal since returning from international duty at the start of the month and Pochettino was full of praise for the England man.

The Argentinian said: "I want to congratulate him, he deserves this moment because he works a lot.

"He's happy in the changing room and his team-mates are happy for him.

"I think he has big potential, he's young and this is his first full season with the first team. We need to push him to try to improve his level.

"He has the potential to improve. He has another challenge maybe now because we have five games ahead. We need to score and win games.

"It's important to finish as high as possible, we don't need to put too much pressure on him. We need to be calm and let him improve."

The victory also moves Spurs up to sixth - level on points with Liverpool having played a game more than Brendan Rodgers' side.

"I think we fully deserved the three points, our performance was good, better than Newcastle and I'm very pleased for the players," Pochettino added.

"After the last two games the feeling wasn't good and it's important to feel that victory again."