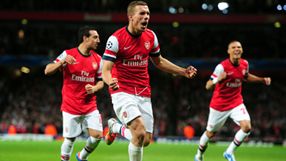 Goals from Gervinho, Lukas Podolski and a stoppage time effort from substitute Aaron Ramsey put a glossy sheen on a performance that for 45 minutes would have had banished coach Arsene Wenger gnashing his teeth in the stands.

The two clubs have become regular rivals in the competition in recent years, with Arsenal comfortable at home and Olympiakos enjoying superiority on home soil.

That symmetry looked about to change in Group B on Wednesday, however, as a strangely subdued Arsenal offered the Greeks every encouragement to put to bed the repuation that they are poor travellers in Europe.

When Kostas Mitroglou sent a graceful header past Vito Mannone to give Olympiakos a deserved equaliser on the strike of halftime the vociferous visiting fans even dared to dream that their side would go on and win in England for the first time.

Podolski's 56th-minute effort, his second Champions League goal for Arsenal after he scored in the 2-1 victory in Montpellier two weeks ago, changed all that, knocking the stuffing out of the Greeks who reverted to their role of obliging guests whose record away to English opposition now reads played 11, lost 11.

Arsenal, without really hitting the heights in their opening two games, now have a maximum six points to top the group, while Olympiakos must recover from two defeats if they are to reach the last 16 for only the third time in 11 attempts.

"They made it really tough for us and defended really well," Steve Bould, standing in for Wenger who is serving a three-game UEFA touchline ban," said of a performance that epitomised the football cliche 'a win is a win'.

"We started off not bad, but then looked nervous. The result from the weekend drained us a little, we lost a little bit of confidence, but overall it is a fantastic result."

"The other game (in the group) was a draw but it's early days, we've still got an awful lot of work to do," assistant manager Bould added.

The victory margin disguised a patchy performance from Arsenal and Wenger's call for a quick response from the loss to Chelsea the previous weekend, his team's first of the season, appeared to have gone unheeded by the players as they were outshone by a creative Olympiakos side in the first half.

Quicker to the ball and more imaginative in possession, the Greek club grew in confidence with Portuguese Paulo Machado at the heart of their best moments.

He served notice of his ability to deliver dangerous balls into the area after 30 minutes when he cut back an inviting pass for the hard-working Mitroglou whose first time shot lacked the power to beat the diving Mannone.

Former Malaga playmaker Santi Cazorla was Arsenal's main threat, the Spaniard forcing a fingertip save from Balazs Megyeri with a wickedly curling free kick, but there was precious little else to excite a home crowd enjoying a 15th successive season in the competition.