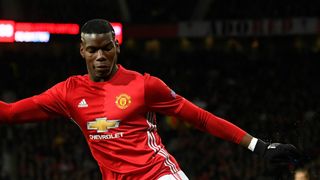 Paul Pogba limped out of Manchester United's Europa League tie against Rostov on Thursday with an injury.

The United midfielder appeared to suffer a hamstring problem when pressing an opponent early in the second half of the last-16 second-leg match and was unable to continue.

After being substituted by Jose Mourinho, with Marouane Fellaini replacing the world-record signing, Pogba gestured to his leg and headed straight down the Old Trafford tunnel, applauding the home fans on his way.

Daley Blind was also taken off by Mourinho after being caught in the face by a Rostov elbow as United's injury problems continued to mount, with club captain Wayne Rooney among the players already ruled out.

The United boss then appeared to forget he had already used two substitutions as he later readied a double-change before having to tell Ashley Young to sit back down.

United are already without Pogba's fellow midfielder Ander Herrera for Sunday's Premier League trip to Middlesbrough with the Spain international out suspended after being dismissed in Monday's FA Cup defeat at Chelsea.