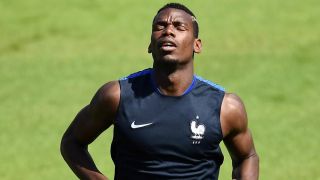 Gary Lineker says Paul Pogba has massive potential, but thinks the Juventus star is still a long way from matching the likes of Zinedine Zidane or Michel Platini and still has to step up to become a great player.

The former England striker caused controversy during France's 2-1 win over Republic of Ireland in the first knockout round of Euro 2016 by describing the midfielder as "overrated".

Having questioned whether Pogba was the world's most overrated player, Lineker went on to state that he "doesn't score many, doesn't create much and is not great defensively" when challenged over his remarks.

Those comments infuriated the player's agent Mino Raiola, who claimed Lineker did not know what he was talking about and ridiculed some of his previous views, including his criticism of Claudio Ranieri when the Italian was first appointed at Premier League champions Leicester City.

Ahead of the Euro 2016 final between France and Portugal, Lineker now concedes that Pogba does have a lot to offer, but stresses he is still far from the finished article.

Lineker wrote in the Mail on Sunday: "Paul Pogba is still very young at 23. He's far from a Zinedine Zidane or a Michel Platini at present.

"He could turn into that. You can see there's a lot of ability there. He covers the ground well, his technique is very good and he's a threat in the air.

"It's whether he takes the next step up to be a great player. He clearly has bags of potential."

Pogba has been linked with big-money moves to former club Manchester United and the European champions at club level, Real Madrid, with reports suggesting he will command a world record transfer fee of £100million.

Lineker added: "In Britain, we're more guilty than anyone at getting carried away with players before they realise their potential.

"While £100m is a lot for a transfer fee, if he moves, his value is what people are prepared to pay. If there's that money around and a lot of clubs fighting for the same player then there is an auction effect and people pay above the odds."