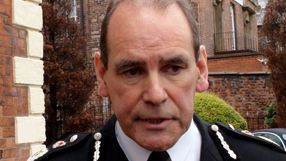 Norman Bettison, chief constable of West Yorkshire Police, said he would stand down to allow a full investigation into charges he misled official inquiries into the 1989 football stadium crush at Hillsborough, Sheffield, in which 96 Liverpool fans were killed.

Earlier this month, he announced he would retire in March, but was standing down early to prevent the investigation affecting police activities.

"I do so [retire], not because of any allegations about the past, but because I share the view that this has become a distraction to policing in West Yorkshire now and in the future," Bettison said in a statement.

Bettison, who denies any wrongdoing, was off-duty but present at the stadium when the tragedy occurred.

A damning report last month uncovered evidence that the police response to the disaster had been flawed, that 41 lives could have been saved and that officers had tried to dishonestly deflect the blame on to fans.

Following its publication, a police watchdog body said it was considering two complaints against Bettison.

The most serious alleged that he "was involved in the production and supply of misleading information" for official inquiries into the disaster, it said.

"Retirement or resignation does not prevent criminal prosecution should the investigation identify criminal offences, including misconduct in a public office," the Independent Police Complaints Commission said in a statement.