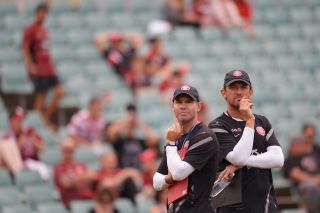 Their debut campaign by far exceeded expectations, but after a rushed pre-season, the Wanderers did not score their first goal until round four in 2012/13.

This time the Wanderers have benefitted from a settled build-up, and with fully fit Japanese star Shinji Ono primed for the season opener against Central Coast away on Saturday, Popovic is confident Western Sydney can hit the ground running.

Ono was thrown into the team just a week before last season kicked off and took time to find his feet but steadily improved to finish with eight goals for the campaign.

"He's had a much better preparation. He's a lot fitter than what he was last year," Popovic said.

"And it's still a long year - it's 27 games. He's like all the players, he'll start off at a good base and he'll get better as the year goes on, as every player will."

With 16 Socceroos caps, Spiranovic is set to play a key role this season after returning to the A-League from Qatari club Al-Arabi.

But the 25-year-old only began training properly with the team last week and will likely be held back until his match fitness improves.

"The depth is good, all across the board. If a player's not ready, he's not quite ready," Popovic said.

"He's not a risk but I think it would be unfair to throw him in straight away, considering the pre-season that he's had, or hasn't had in the last 12 weeks.

"But we go into the season with all but a couple of players that are fit and ready to go, that have had a strong pre-season.

"They've got some minutes into their legs in the matches, and we won't be on top form in round one, but I doubt any team would.

"We're confident we're in a good place – that we can put on a performance that gives us an opportunity to get the points."

Popovic said the anticipation had been building amongst his players as the clash with the Mariners drew closer.

"You can certainly see the different focus on the players and you can sense the excitement that it's getting closer now, and that's been reflected in the team's training," he said.

"It's been a long pre-season and I think everyone's looking forward to the start now."