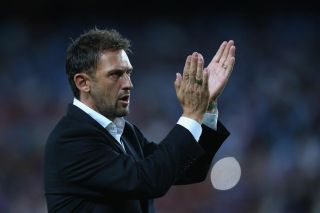 "We lost the first game at home, so to turn it around in that fashion and get first place is a great result for this club... It is a fantastic achievement,” said Popovic.

"To win four of five games since the opening game is a credit to us. The belief was still there (after the first game).”

The Wanderers were rarely troubled by an injury-hit Guizhou but it wasn't until the final quarter-hour that the home side took the match by the scruff of the neck with a four-goal salvo.

"We lost our way a little bit,” Popovic said of the failure to capitalise on Shannon Cole's early opener.

"The decision making wasn't great, and we got a bit casual, got a bit  complacent. Once we scored that second goal you could see the players relaxed. The ball movement was back and in the end it could have been anything.

"But maybe scoring an early goal makes the players complacent. In the end it was a professional performance.”

The Wanderers will now take on the runner-up in Group F where A-League rivals Central Coast Mariners are still in contention alongside FC Seoul, Beijing Guoan and Sanfrecce Hiroshima.

Popovic remains unperturbed about next month's opponent in the two-legged Round of 16.

"Whoever we play now we know that we are a chance," he said. "We are learning how to control a game better, we are learning all the time with each match."