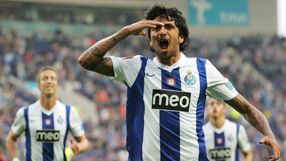 The title race remains wide open with Porto on 60 points ahead of Benfica with 59 and Braga, who have slipped to third, on 58 and only five matches to go.

"It's all very tight at the top of the league and all three teams stand a chance, the one-point difference is nothing," said Benfica coach Jorge Jesus.

Porto enjoyed a comfortable victory over mid-table Olhanense thanks to goals by Lucho Gonzalez and James Rodriguez midway through each half before Benfica welcomed Braga to the Luz stadium for a match between first and third.

Benfica took charge from the start and dominated possession while Braga tried to hit the Eagles on the counter-attack. However, the game remained scoreless until 15 minutes from time when Benfica's Belgium midfielder Axel Witsel converted a penalty after Cesar was pushed in the area.

"This was a great match, with two excellent teams," said Jorge Jesus. "Braga showed why they were top before the first whistle. We were able to circulate the ball better and had great firepower in front thanks to the home factor."