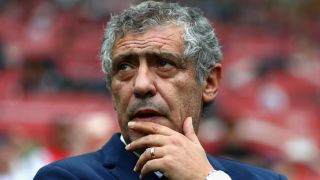 Portugal boss Fernando Santos admitted his side "got carried away" with trying to kill off Hungary in Sunday's crucial 1-0 World Cup qualifying win in Budapest.

Andre Silva's header ensured the European champions remained within three points of Group B leaders Switzerland, but the margin of victory was slimmer than expected following Tamas Priskin's first-half sending off.

The Ferencvaros forward was shown a straight card for elbowing veteran defender Pepe in the face, leaving the hosts to battle for an hour with only 10 men.

Santos' side failed to put the contest to bed despite their advantage and the 62-year-old questioned his players' approach.

"We were by far the best team on the pitch for the first 30 minutes," Santos told RTP.

"After the dismissal of [Priskin], I do not know what happened ... we let ourselves get carried away by very aggressive football and then we lost the next 15 minutes.

"At the interval I told them not to lose their focus.

"We came back very well afterwards and we scored the goal and from then on we had control of the game, but it was always a dangerous situation."

Portugal next visit Andorra in October before returning home to take on Switzerland in a clash that will likely determine who progresses directly to Russia 2018.

However, Santos insists Portugal - who boast a far superior goal difference - will not be getting ahead of themselves with two matches to play.

"Now there are two finals left. The first is in Andorra, which will be more complicated than many think," he said.