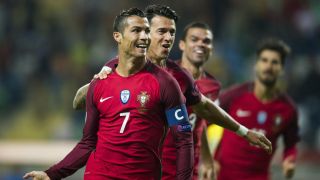 Ricardo Carvalho hopes to watch Portugal add the Confederations Cup to their trophy cabinet after defying his advancing years to win the European Championship last season.

Then 38, Carvalho became the oldest player in the history of the UEFA event in France last year, and helped his team claim their first piece of major international silverware thanks to a dramatic extra-time triumph over the hosts in the showpiece in Paris.

Now 39 and playing for Shanghai SIPG, the former Porto, Chelsea, Real Madrid and Monaco defender is not among the squad picked by head coach Fernando Santos for the World Cup warm-up event in Russia, where Portugal face Mexico in their opening game in Kazan on Sunday, but he will be watching his countrymen with keen interest.

"I was proud of that," he was quoted as saying by the FIFA website when asked about his role at Euro 2016.

"This is another great competition for us after 2016, and I think the ambitions are again to win the cup.

"We already got our names carved in the European trophy last year, so it is important now to get out hands on a global trophy for our country.

"It would mean a lot. The Portuguese people love football and, after seeing the team prevail in Europe last year, they are waiting for the next great achievement."

Portugal have been training in Kazan today ahead of their opener with Mexico on Sunday June 15, 2017

All eyes in Russia and around the world during the tournament will be on Portugal's superstar forward Cristiano Ronaldo, who earned effusive praise from his former Madrid colleague.

"Cristiano is the most complete player in the world. And he works harder than anyone," Carvalho said.

Eintracht Frankfurt's Marco Fabian, though, insists Mexico will not be distracted by the task of trying to halt the Ballon d'Or holder.

"No way," he said when asked if the CONCACAF Gold Cup winners will assign a dedicated marker to Ronaldo.

"We have trained focusing on Portugal, not Cristiano Ronaldo, and the team is in good shape. We have to make an example on Sunday and try to start off with a win."

Fabian's view was supported by goalkeeper Guillermo Ochoa, who added: "It's Portugal, not just Cristiano.

"We know what type of player he is, but aside from him there are other quality players that we have to stop."

Mexico must make do without Porto forward Jesus Corona, who is missing the tournament due to personal reasons.

"As a player we know the quality he has and what he offers," Ochoa said.

"Now we have to take on the cup with the players we have and there is quality and talent."

Portugal won 1-0 in a friendly in their previous meeting in June 2014, while Mexico's Rafael Marquez is a survivor from his team's 2-1 loss to Portugal in the group stages of the 2006 World Cup in Germany.

Key Opta stats:
- Mexico are participating in their seventh Confederations Cup, equalling Brazil for the most appearances at the tournament.
- Mexico goalkeeper Guillermo Ochoa made 162 saves for Granada in La Liga this season, 35 more than any other goalkeeper.
- Cristiano Ronaldo was the top scorer in this season's Champions League, finding the net 12 times, while only two players assisted more than Ronaldo (five, behind Neymar and Ousmane Dembele).