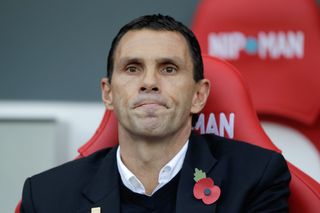 Fabio Borini came off the bench to score with six minutes remaining and secure a valuable win for Poyet in his first home game since taking charge at the Stadium of Light.

The Uruguayan manager was understandably delighted and urged his side to build on their derby triumph, which lifted them above fellow Premier League strugglers Crystal Palace.

"We beat our biggest rivals, that’s even bigger,

"This is what we needed, so from now on there are no excuses. We needed a lift, and there is no better lift than this one."

Poyet's decision to introduce Ki Sung-Yueng and Borini with just over 20 minutes to play made a difference for Sunderland, and the manager admitted he was pleased with the impact the substitutes made on the game.

"They were outstanding," he added. "If we didn’t control a little of the ball I felt we would have been defending for 20 minutes and I didn’t want to defend for 20 minutes.

"Even if it was a little bit slower, we needed to do it (make the change). We gave so much that it was impossible to retain that energy.

"Fabio was so close to playing. The way he's been training, his attitude, how positive he is, but sometimes you cannot play him."