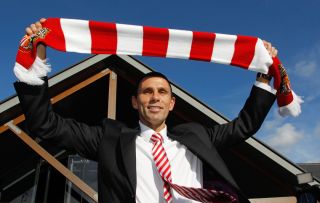 The Uruguayan has arrived at the Stadium of Light with Sunderland bottom of the Premier League with just one point from their opening seven matches.

Former manager Paolo Di Canio brought in a host of new signings during the close-season and Poyet has no intention of adding to those numbers until he has given every player the opportunity to shine.

The 45-year-old revealed that transfer funds had not even been part of the discussions with chairman Ellis Short before he signed his two-year-contract.

"To be honest, we didn't talk about funds for team strengthening before I came here," he told The Chronicle.

"My idea is to assess the players that are here and make sure I check them properly - which ones are down, which ones want to be here and which ones can help me.

"I will learn things this way. And then, depending on what I see in the next month or two, I will talk to the owner.

"But I don’t think we can start talking too much before then.

"At the moment, it’s not something I’m even thinking about."

Poyet's first game in charge of the club comes on Saturday when they face Swansea City at the Liberty Stadium.