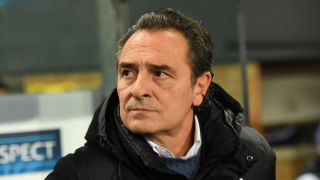 Cesare Prandelli hopes to restore stability at Valencia and regain the club's spot in the Champions League.

Prandelli was appointed as Pako Ayestaran's successor at the end of last week, making him the LaLiga club's eighth head coach in a little over four years.

Caretaker boss Voro ended a run of four consecutive defeats with back-to-back 2-1 wins over Alaves and Leganes, but, as Prandelli took up a watching brief at the Mestalla on Sunday, a 2-0 win for league leaders Atletico Madrid left Los Che third bottom.

The former Italy boss is taking on his first coaching post since being sacked by Galatasaray in November 2014, spoke at a media presentation on Monday.

"I think Valencia have an interesting football project," he said. "I'm optimistic. There are interesting players and my intention is trace a balance in the game.

"The intention is a return to the Champions League, being a long-term project. Maybe in six months or one or two years.

"I want to play a collective game. Have the ball but always is not possible. We want a compact team with a football idea. We have to be precise on that."

8 - Prandelli will be the 8th different Italian manager in La Liga history - only 8 countries have provided more in the competition. Welcome October 3, 2016

Prandelli is keen to give the players at his disposal the chance to turn Valencia's fortunes around before casting his eye towards what kind of support owner Peter Lim can grant him in the January transfer window.

"At the moment I do not think of the winter," he added, having signed a contract that runs until June 2018.

"I think there is the right to give value to this squad. It is a misconception in the market, to assess this squad [now].

"With Peter Lim, I had a very interesting meeting. It is a project long-term."