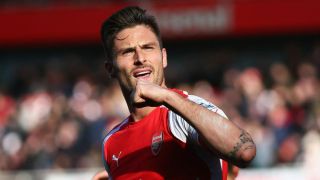 The France international had been widely derided in midweek for missing a host of chances in the 3-1 defeat to Monaco in the UEFA Champions League last 16 first leg.

But Giroud made up for his poor performance on the European stage by breaking the deadlock in the first half, before substitute Tomas Rosicky's late goal settled the hosts' nerves.

Giroud - who scored a late leveller when Arsenal drew 2-2 at Everton in August - netted his 12th goal of the season with a low effort from Mesut Ozil's corner and Rosicky's deflected drive in the final minute scuppered any hopes the visitors had of earning a share of the spoils.

Before that intervention, Arsenal had relied heavily on the fine form of David Ospina, the goalkeeper frustrating an Everton side who now have just three wins from their last 18 league games.

Roberto Martinez's side remain only six points above the drop zone, while Arsenal are one point ahead of fourth-placed Manchester United and still three clear of Liverpool following their success over Manchester City.

Arsenal may have fallen behind in the 17th minute if not for a piece of smart goalkeeping from Ospina, who raced off his line to rob Romelu Lukaku of the ball after the striker had beaten Gabriel Paulista - in for Per Mertesacker as part of three changes from midweek - to a long ball over the top.

Giroud then spurned Arsenal's first chance as he turned Alexis Sanchez's near-post cross wide with a diving header, but soon atoned for that miss to break the deadlock.

The former Montpellier man converted Ozil's set-piece delivery with a cool first-time finish into the bottom-left corner six minutes before the interval.

Arsene Wenger's men gained confidence from that opener and went close to adding a second shortly after when Santi Cazorla's long-range effort was tipped over the crossbar by Tim Howard, who was tested by his own player from the resulting corner as Muhamed Besic's attempted defensive header forced the American into a save.

Everton started the second half the stronger, though, and almost levelled in spectacular fashion as Gareth Barry sent a bicycle kick narrowly over the bar.

Lukaku provided Everton's main threat and only the acrobatics of Ospina prevented him from levelling matters.

Ospina dived brilliantly to his right to turn the Belgium international's shot over the target following a superb cross from Ross Barkley.

Substitute Aaron Lennon shot straight at Ospina and Ozil had an effort deflected wide at the other end before the German picked out Rosicky to settle matters.

He fired home just seven minutes after coming on as Arsenal kept themselves in a strong position to return to the Champions League, despite a late point-blank miss from Giroud.