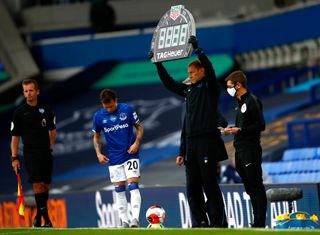 Premier League sides have sufficient depth to cope with the five substitutes rule, insists the head of the world players’ union.

English top-flight clubs voted to adopt a temporary dispensation to the laws of the game to enable them to make up to five changes in the final part of the 2019-20 season played in June and July, following the suspension of competition due to the coronavirus pandemic.

On August 6 clubs voted to revert back to three substitutes per match for the 2020-21 season, but there are reports that some are pushing for a new vote at Thursday’s shareholders’ meeting.

#PL Clubs also agreed to revert back to using up to three substitute players per match, with a maximum of seven substitutes on the bench. pic.twitter.com/e3Fqtf9QNr— Premier League (@premierleague) August 6, 2020

Jonas Baer-Hoffmann, the general secretary of FIFPRO which represents the interests of players at the global level, insisted the rule was helpful in alleviating the demands on players and that the argument of competitive imbalance does not stack up in the English top flight.

“It’s the right thing to do, it doesn’t harm football one bit in terms of the sporting sense,” he told the PA news agency.

“We understand that some clubs are raising concerns about competitive balance but to be honest that problem is so much bigger than a couple of extra substitutions. If that needs a conversation, it needs to begin in different places.

“The Premier League is arguably the most competitive league across Europe in terms of the depth of teams performing. It would be one of the least concerned leagues in my opinion when it comes to that (issue), compared to many others who have accepted the rule.”

“For those at the top the calendar is going to be unsustainable, and every little bit that helps with load management is important,” he added.

“Five subs does make a difference in terms of the coach’s ability to play someone for a half or for 60 minutes and then give them an extra rest.

“What we have already heard from some clubs who have embraced the rule is that for the coaches it has made quite a difference because once you know you’ve got this extra space to work with, young players who might have sat just outside the rotation all of a sudden become interesting – they get playing time and opportunities to develop.”

The game’s law-making body, the International Football Association Board (IFAB) announced in July that the five substitutes rule would be extended into 2020-21, but that it would be up to individual competitions whether or not they adopted it.