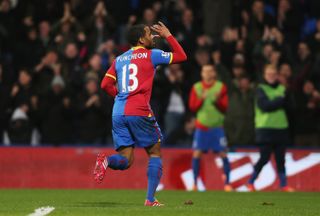 Jason Puncheon's third league goal of the season was enough to seal the win at Selhurst Park, the 27-year-old reacting quickly after his initial effort had been blocked by the Hull defence.

Tom Huddlestone, Jake Livermore and Liam Rosenior all went close for Hull but they were unable to beat Julian Speroni in the Palace goal, meaning Steve Bruce's side, who had Allan McGregor sent off in stoppage time, have now failed to score in over six hours of Premier League football.

The win moves Palace up two places in the table to 14th and level on points with their opponents, who have now lost their four league matches since last month's 6-0 thrashing of Fulham.

Jonathan Parr was forced out through injury and replaced by Dean Moxey at left-back for Tony Pulis' side, while Shane Long made his Hull debut up front alongside Nikica Jelavic.

The visitors started the better and after surviving an early miss by Mile Jedinak they had two penalty shouts waved away by referee Roger East.

Jelavic was first to go down under a clumsy Adrian Mariappa challenge, before Long tangled with Danny Gabbidon inside the penalty area, but neither were given, and the hosts used the momentum to take the lead.

In the 16th minute, Yannick Bolaise broke down the right and delivered a perfect cross onto the head of Puncheon, his first effort was blocked but he made no mistake with the rebound and lashed it into a helpless McGregor's top corner.

Palace continued to dominate the remainder of the half, McGregor smartly saving Jedinak's long-range free-kick.

Huddlestone came closest for Hull in first-half injury time but his 30-yard free-kick was nervily punched away by Speroni.

Livermore nearly gave Hull a boost in the opening minutes of the second half, however after shrugging off the attentions of a Palace defender he fired over from the edge of the penalty area.

The visitors pushed forward after the interval as expected, and as they continued to push for an equaliser Rosenior wasted an excellent chance in the 63rd minute.

After a superb run down the right by Livermore, the Tottenham loanee's cut-back was met by Rosenior but his effort flew wide.

Long had Hull's final chance to earn a point but after rising above the Palace defence he headed over at the back post, and their night went from bad to worse when McGregor was dismissed in injury time.

The goalkeeper picked up his first yellow card for an altercation with Cameron Jerome, and  was dismissed after allowing his temper to boil over and kicking out at Stuart O'Keefe following a late challenge just 10 minutes later.