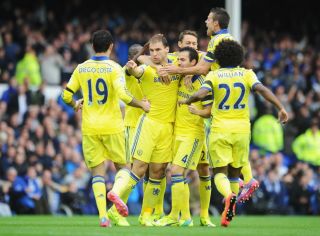 The Spain striker had not even been guaranteed to play in Saturday's encounter, after the London club revealed during the week that he had suffered a muscle problem.

However, he shook off any fitness concerns to take his place in attack - and duly delivered another two goals to continue his flying start to life in England, following his big-money move from Atletico Madrid.

That Costa's brace - his third and fourth goals in his first three games - had to vie for the headlines said much about a game that will go down as one of the most remarkable seen in the Premier League in recent times, as Chelsea maintained their 100 per cent start to the season.

Costa and Branislav Ivanovic hit the hosts with a quick-fire double inside the opening three minutes to leave the Goodison Park crowd stunned.

But that was only act one in a dramatic script that also included a late goal for Everton new boy Samuel Eto'o against his former club.

Sylvain Distin was denied by the assistant referee's flag at the other end and Tim Howard looked fortunate to escape a red card for handball in a frantic opening, before Kevin Mirallas reduced the deficit on the stroke of half-time.

A second-half Seamus Coleman own goal was quickly followed by Steven Naismith's third strike of the season, before Nemanja Matic then made it 4-2 to Chelsea.

Eto'o, introduced from the bench for the final 20 minutes, got in on the act to give Everton hope, but Ramires and then Costa with his second meant that Chelsea had the final say to leave Everton winless this season.

Jose Mourinho's league leaders, on the other hand, continue to justify their tag as title favourites on a day when champions Manchester City suffered a shock home loss to Stoke City.

It had been feared that Costa would miss the match, with Chelsea announcing on Thursday that the former Atletico Madrid talisman had suffered a "minor muscular problem".

And Everton would likely have wished that his name was not on the team sheet when the 25-year-old collected Cesc Fabregas' pass and sprung the offside trap before sliding the ball between the legs of a woefully exposed Howard after just 35 seconds.

Things went from bad to worse for Roberto Martinez's side when Ramires forced the ball through a disorganised home defence to pick out Ivanovic, who in turn found the back of the net - although he looked to have strayed beyond the last defender.

Amazingly, the early drama continued as Howard raced out to collect Eden Hazard's searching long ball and handled outside his area, but the American goalkeeper escaped punishment.

The hosts thought they had pulled a goal back in the 15th minute after former Chelsea striker Romelu Lukaku's header struck the crossbar and was turned in by Distin, but the defender was offside.

Distin was then relieved to see a Fabregas strike flash just wide after the Frenchman had got a toe-end on the ball in the 29th minute.

Everton responded, and Mirallas brought them back into the game with an excellent header from Coleman's cross in first-half stoppage time.

Phil Jagielka's careless pass inside his own half almost sent Everton back to square one within seven minutes of the restart, but Costa was thwarted by Howard after racing through on goal.

Chelsea's third did arrive in the 68th minute when Hazard's attempted cutback was turned into his own net by Coleman, only for Naismith to hit back inside 60 seconds with a cool side-footed finish after getting in behind a static visiting defence.

Matic's measured strike from distance kept Chelsea on top, though their lead was narrowed when Eto'o seized his moment to keep the pressure on with a close-range finish.

Remarkably, that was not the end of the scoring, as Ramires found the bottom corner with 13 minutes left and then substitute Muhamed Besic's poor first touch handed Costa his second, completing a memorable Chelsea victory.