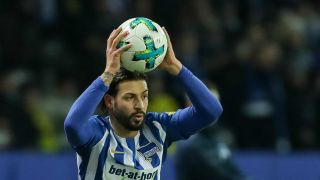 Germany left-back Marvin Plattenhardt says he feels at home with Hertha Berlin amid speculation he could move to the Premier League.

The defender, reported to be valued by Hertha at €25million, has been linked with clubs including Everton, Leicester City, Fulham and Bournemouth.

But the 26-year-old says he will not be pushing for a move from Bundesliga side Hertha, who he joined four years ago.

"My agent hasn't come to me with any sort of opportunity and I am in regular communication with [sporting director] Michael Preetz," Plattenhardt told Hertha's official website.

"I have a good relationship with him and it's easy for us to talk about a lot of things, including things away from football.

"Neither side is pursuing anything with any other clubs. Therefore, I expect to start the season at Hertha. I've developed really well here over the last few years and I feel at home.

"I want to prepare for the new season as best as I can over the coming weeks and get back to 100 per cent as quickly as possible. I look forward to getting back out onto the training pitches with the rest of the boys."

We had a very open and frank exchange at the , in which we have addressed many issues. We are all firmly convinced that Jogi Löw is still the right coach for our team . July 3, 2018

Plattenhardt made a single appearance as World Cup holders Germany crashed out of Russia 2014 at the group stage.

But the left-back is glad Joachim Low will be staying on as Germany's head coach and he wants to remain a part of the national team despite the disappointment.

"The management has already started to analyse what went wrong and will continue to do so for the coming weeks and months," Plattenhardt added.

"The head coach is going to stay, which I think is the correct decision. Low has achieved a lot over the last few years and with that comes respect. I would obviously love to remain a part of the team.

"I think that lots of things were assumed by people on the outside. The atmosphere within the team was not bad and our team base was not bad either.

"We can only apologise to the Germany fans. Our team had so much quality and we simply had to do more. For me personally, however, I fulfilled a childhood dream. I followed the big tournaments on TV when I was a little boy, so it was amazing to be the one playing this time round. It's an unbelievable honour to participate at a World Cup."