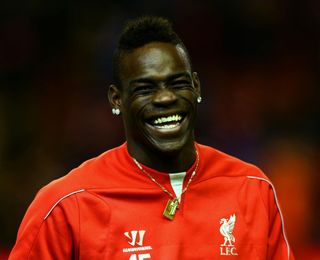 Mario Balotelli scored his first Premier League goal for Liverpool as they boosted their hopes of a top-four finish in the Premier League with a 3-2 win over Tottenham on Tuesday.

Balotelli has endured a tough first season at Anfield, but picked an ideal moment to break his top-flight duck for the club with a well-taken late winner shortly after coming off the bench for Daniel Sturridge - who made his first Liverpool start since their 3-0 victory at Tottenham in August.

Despite lacking match sharpness, Sturridge was dangerous throughout his 74 minutes on the pitch and was heavily involved in Liverpool's first two goals.

Steven Gerrard restored Liverpool's advantage from the penalty spot eight minutes after half-time after Sturridge had gone down under an ill-advised challenge from Danny Rose.

Again Tottenham replied, though, as Moussa Dembele's close-range leveller just after the hour was allowed to stand despite Kane appearing to have strayed offside from Christian Eriksen's free-kick.

But there was one final twist in the tale as substitute Balotelli popped up seven minutes from time to smash home a low cross from fellow substitute Adam Lallana.

The win lifts Liverpool to within a point of Tottenham and just three points adrift of fourth-placed Arsenal.

Liverpool's early pressure paid off as Markovic made the most of good hold-up play from Sturridge to find the bottom-right corner with a scuffed strike from the edge of the area despite Hugo Lloris getting a hand to the shot.

But for all Liverpool's early dominance they were pegged back 11 minutes later as Kane continued his fine run of form.

Erik Lamela's pass squeaked through the Liverpool defence and into the path of Kane, who restored parity with a low shot under the legs of Simon Mignolet.

Tottenham struggled to build on that equaliser, and only the woodwork kept them on level terms as Sturridge struck the post with a clever back-heeled effort following brilliant work down the right from Ibe.

Liverpool continued in the ascendancy after the break and were duly rewarded when Gerrard converted from the spot.

The skipper beat Lloris to the keeper's left-hand side after Sturridge had cleverly jinked his way into the box and drawn a foul from Rose.

Lamela drew an acrobatic save from Mignolet as they sought a quick response, which came in the 61st minute as Dembele bundled the ball in from two yards.

Dembele turned home a pull back from Kane - who appeared to be marginally offside in the build-up - after Eriksen's curling free-kick had been kept out by Mignolet.

Liverpool looked to be running out of ideas in their search for an equaliser, but the introduction of Lallana and Balotelli proved the turning point as the England playmaker raced to the byline to pull back for Balotelli to break his duck and settle an enthralling encounter.