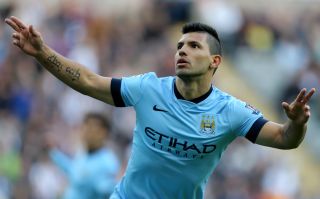 Silva broke the deadlock just before half-time to finish a flowing move, before substitute Aguero came off the bench to finish at the second attempt in injury time, as the visitors got their campaign up and running.

City, who are determined to learn the lessons this season of their ill-fated attempt to retain the crown two years ago, have been handed a difficult start with Liverpool, Arsenal and Chelsea awaiting in three of their next four games.

The onus, therefore, was on Manuel Pellegrini's men to hit the ground running at St James' Park - and they did just that thanks to an impressive display, highlighted by some wonderful attacking play.

Newcastle had their chances - the best of which fell to Yoan Gouffran in the second half - yet few could deny that City deserved the points.

And in particular the sight of Aguero finding the net on his return to action after his recent injury problems that restricted his participation for Argentina at the World Cup will have given Pellegrini an added spring in his step.

That set the tone for a dominant start, Samir Nasri stinging the hands of Krul with a half-volley from range.

Yet Newcastle gradually began to find their rhythm amid an emotional atmosphere that saw tributes both before and during the first half to remember supporters Liam Sweeney and John Alder, who lost their lives in the Malaysia Airlines flight MH17 crash.

New signing Remy Cabella was bright for the home side, chipping just over the crossbar.

However, he and his team-mates could do little as City took the lead with a stunning goal in the 39th minute.

A searching ball forward found Dzeko, whose superb back-heel left Silva with the simplest of finishes.

Newcastle responded well after half-time, a deep corner finding Gouffran - whose effort drew a smart save from Joe Hart in the Manchester City goal.

The hosts' industry continued, too, with Paul Dummett heading just over in between three Jovetic half-chances.

The best of those came when the forward was denied by a superb Fabricio Coloccini block as City threatened a second goal.

Jovetic was also instrumental in City's next opening, sending over a clever pass that Dzeko headed narrowly over with 27 minutes left.

Suddenly back on top, the visitors continued to press forward, with Yaya Toure's free-kick narrowly missing the target late on.

That effort preceded a spell of home pressure as Alan Pardew's side did everything in their power to get back into the game, substitute Ayoze Perez seeing an effort deflect agonisingly wide.

Newcastle then spurned an even better chance, as Moussa Sissoko blazed over from just outside the area.

And City made them pay, Aguero - on as an 83rd-minute replacement for Dzeko, much to the delight of the City fans - curling home after his initial effort was saved by Krul.