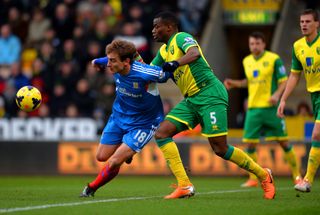 The hosts came into the game having scored just 10 goals in as many Premier League games at Carrow Road, and a lack of clinical finishing looked as though it would let them down in a game they dominated much of.

Hughton's side fired 23 shots at the Hull goal, but only three were on target - highlighting their deficiencies in front of goal.

But Bennett grabbed the only one to matter as he leapt highest to head a Robert Snodgrass corner home in the 87th minute, moving Norwich five points above the relegation zone.

A dismal outing for Hull was compounded by Tom Huddlestone's dismissal after they fell behind.

Both sides included debutants in their team, Newcastle loanee Jonas Gutierrez making his Norwich bow, with Nikica Jelavic coming straight into the visitors' attack and almost making the perfect start to his Hull career in the second minute, but his close-range effort from Robert Koren's cut-back clipped the post and went wide.

Norwich improved though, Snodgrass blasting an effort wide, and Ricky van Wolfswinkel missing the target from four yards from the Scot's knock-down.

Hull manager Steve Bruce was dealt a blow on 13 minutes as James Chester limped off with a hamstring injury. Maynor Figueroa came on for his 200th Premier League appearance in Chester's place - the substitution also prompting a change in formation from 3-5-2 to 4-4-2.

The switch appeared to disrupt Hull's rhythm as Norwich became more threatening, with Van Wolfswinkel and Leroy Fer both denied by courageous interventions from the away defence on the half-hour.

Snodgrass brought a fine save from Scotland colleague Allan McGregor from 25 yards and the half ended with Curtis Davies thumping a header over from a corner.

Norwich started the second half in dominant fashion, the dangerous Van Wolfswinkel and Snodgrass seeing further efforts on goal blocked.

Gary Hooper launched a 30-yard effort over McGregor's crossbar as the hosts appeared to grow frustrated with 20 minutes to go.

But they were relieved in the closing stages as Bennett struck his first goal for the club, before Huddlestone was sent off for a second bookable offence.

Davies glanced a header wide in stoppage time as Hull failed to find a response and they have now picked up just two points from the last 24 available to them on the road.