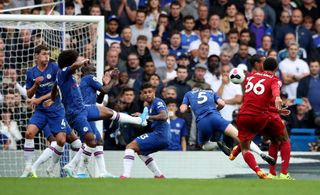 Liverpool launch this weekend’s round of fixtures in a lunch-time kick-off at Bramall Lane.

Jurgen Klopp’s side could move eight points clear at the top with victory before title rivals Manchester City’s tea-time kick-off at Everton.

Here, the PA News Agency highlights some of this week’s main talking points.

Can Blades cut down Klopp?

Liverpool despatched MK Dons in the Carabao Cup in midweek and Klopp will revert back to his accustomed starting XI as his side resume their Premier League title charge. The Reds are expected to extend their 100 per cent league start by notching their seventh straight win, but it will be no cakewalk at a sold-out Bramall Lane. The Blades fought back from 2-0 down to take a point off Chelsea at Stamford Bridge and won at Goodison Park last week. Can Klopp’s side close to within two victories of Chelsea’s best-ever Premier League start when they won nine on the bounce in 2005?

Everton eased some of the pressure on boss Marco Silva with victory in the Carabao Cup at Sheffield Wednesday in midweek, but must be wary of another lightning start by Manchester City, who struck five times inside the opening 18 minutes in last week’s 8-0 rout of Watford. The champions, stung by their recent defeat at Norwich, have a clinical, steely resolve about them, scoring 14 goals in their last three matches and it is difficult to envisage anything other than a fourth Premier League defeat of the season for the Merseysiders, who sit three points above the relegation zone.

Ole Gunnar Solskjaer could turn to Mason Greenwood to help solve his side’s goalscoring problem by handing the teenager his first Premier League start of the season against Arsenal on Monday night. United, who head into the weekend fixtures in eighth place, 10 points adrift of leaders Liverpool, have scored more than once in only three of their last 20 matches in all competitions, while the 17-year-old has netted their last two. Arsenal, three points better off in fourth, have won only one of their last 16 visits to Old Trafford, but now could be a good time to improve on that record.

“Our experience of Newcastle last year was that they sat in and defended deep, and we found it difficult to break them down." 🕵️— Leicester City (@LCFC) September 27, 2019

Newcastle have won on their last two visits to the King Power Stadium, but this time their match-winner on both occasions, Ayoze Perez, will be lining up against them. Leicester’s £30million summer signing has yet to score for the Foxes, but could hit the goal trail for them against his former club. Brendan Rodgers’s side provided further evidence last week that they can mount a top-four challenge by beating Tottenham, with James Maddison to the fore again. Steve Bruce is finding it tough going with the Magpies, whose only win this season came at Tottenham last month.

No time for sulking at Spurs

All eyes will be on Tottenham to see how they respond to their embarrassing midweek Carabao Cup exit at Colchester. The Londoners’ season could really start to unravel if they lose again. They recently squandered a 2-0 lead to draw in Greece against Olympiacos in the Champions League and then lost at Leicester before losing on penalties against a side that is mid-table in League Two. Southampton, a point behind Spurs in the table, thumped south-coast rivals Portsmouth on Tuesday night, while their four wins in all competitions this season have all come on the road.