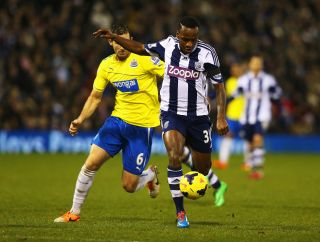 England Under-21 international Berahino converted from the spot three minutes from time on Wednesday - his second goal in as many games - to move the Midlanders four points clear of the relegation zone.

It proved a game of few openings in wet conditions at The Hawthorns, but the contest turned midway through the second half when Newcastle defender Mathieu Debuchy was sent off for a dangerous tackle on Claudio Yacob.

At that point, Keith Downing's men looked to have wasted an opportunity to pull away from the drop zone, but goalkeeper Tim Krul's rash challenge on Matej Vydra helped them secure all three points against a Newcastle team that also lost captain Fabricio Coloccini through injury.

Stephane Sessegnon was restored to the West Brom starting XI as one of four changes made by interim head coach Downing, while Newcastle included striker Shola Ameobi in place of Vurnon Anita.

West Brom made the brighter start to an open first half and would have taken the lead had ex-Sunderland man Sessegnon been able to get a touch to Liam Ridgewell's dangerous low cross.

Newcastle spurned their first real chance after 25 minutes when Mike Williamson nodded Debuchy's far-post cross into the path of Yohan Cabaye, only for the France midfielder to fire narrowly wide.

The hosts continued to do most of the pressing, but Downing's side were undone by their profligacy in front of goal, as Jonas Olsson and Chris Brunt - a scorer in the 2-1 away defeat to Newcastle in November - both headed wide before the half-hour mark.

But it was Nicolas Anelka, who opened his West Brom account with a double against West Ham last Saturday, that wasted the best opportunity of the half as he turned Morgan Amalfitano's pull back over the bar from point-blank range just before the interval.

Both sides made attacking changes at half-time with Berahino replacing Billy Jones for West Brom and Yoan Gouffran making way for Hatem Ben Arfa for the visitors.

Still, chances proved few and far between in the early stages of the second half, Loic Remy going closest when the curled an effort just over the bar from the edge of the area.

The complexion of the game was changed after 62 minutes, though, when Debuchy was dismissed by referee Lee Mason for a two-footed tackle on Claudio Yacob, although the Frenchman did emerge from the challenge with the ball.

And Newcastle suffered a further blow shortly after as Coloccini limped off to be replaced by Mapou Yanga-Mbiwa.

Ridgewell appeared to have missed West Brom's final opportunity when he shot wide with the goal gaping, but West Brom secured their first win under Downing when Berahino slotted home from the spot following Krul's moment of madness.