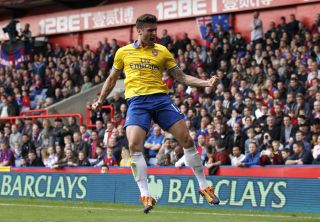 The France international was not at his best during his first campaign in England in 2012-13, but has made an impressive start to his second term with the north London club.

Giroud has scored eight goals in all competitions to establish himself as Arsene Wenger's first-choice striker.

And the former Montpellier man puts his form down to having a better preparation for the season and regaining his confidence.

"I think technically I had it before, maybe I progressed because we have worked on it a lot in training," he told Arsenal's official website.

"It is also (down to) confidence. I did well from the start of the season, I had good preparation with the team - instead of last season when I wasn’t here from the beginning - and I scored early in the pre-season games.