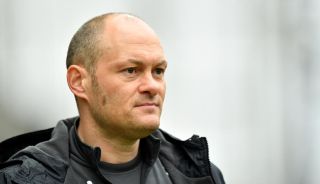 Preston manager Alex Neil admitted his side must improve and quick despite two goals in four minutes from Paul Gallagher and Alan Browne keeping his side in the play-off spots.

Neil was left frustrated that his side failed to control the game against struggling Hull and relied on a second half comeback to earn all three points and stay in the promotion hunt.

“I don’t think we’re as bad as people were suggesting in the first half,” said Neil. “I think we lacked a bit of bravery and I didn’t think we got the ball out (wide) enough. I think when we did move it, we moved it too slowly.

“I don’t think the conditions helped, but for us, and I said this to the players at half-time. If we want to move up the table and if you watch Fulham, Brentford or any of the top teams like the West Broms, they go and outplay teams.

“We need to go and move the ball. If we resort to just banging the ball forward and hopefully playing in their half, it isn’t going to be enough.

“Alan’s (Browne) goal is what Alan has done for us the last two years that he has been here.

“It’s a sensational goal, and what I’ll say about Jayden (Stockley) is that technically for a big man, he is a very good player. He’s shifted the ball to his left, clipped a great ball in and Alan does what Alan does.”

Hull took the lead five minutes before half-time through Mallik Wilks, but the visitors saw their lead disappear in four second-half minutes.

Darnell Fisher was fouled inside the penalty area and Gallagher made no mistake in firing home the equaliser from the spot.

Then substitute Browne met Jayden Stockley’s cross from the left to head Preston into a lead they protected to the final whistle.

Hull manager Grant McCann said: “For large periods it was a good away performance, it was probably the best we’ve played for a while in terms of overall performance.

“Preston ramped it up a bit, made a couple of substitutions and injected a bit of energy into the game. The first goal is shocking really, it is a mistake by the referee. I thought Fisher’s gone down very easily if you watch it back.

“We knew that leading into this game Preston had the most penalties in the league and it seems they always happen at this end. I think he has got sucked into the first one that wasn’t a penalty, and the next one he’s going to give it.

“We were defending well and dealing with things, but the second goal is not good enough from us. We spoke at half-time about the balls coming into our box and the distances between the back four. That’s avoidable, we should have defended that.”

“We tried to make a couple of positive changes to try and get back in, we had a couple of half-chances that we just didn’t take and after that I can’t remember Preston having a chance.

“They just sat back, and we came a bit stronger towards the end. In the run we’re in the minute unfortunately there’s things you don’t get, and we have to change that tide.”