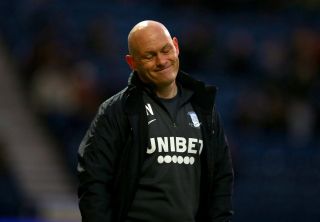 Preston boss Alex Neil thought his side were good value for the 2-1 victory at struggling Wigan that took them back into the Sky Bet Championship play-off places.

The visitors were in front inside seven minutes at the DW Stadium through Tom Barkhuizen, after a good cross from Daniel Johnson.

And Johnson himself doubled the lead four minutes after the restart with a low shot from 12 yards.

Wigan only really sparked into life following the arrival of substitute Joe Gelhardt, who immediately set up a goal for Chey Dunkley in the 57th minute.

But the home side were unable to force an equaliser, with Gelhardt seeing a last-minute effort well saved by Declan Rudd.

“But I felt in our good spells we were more dangerous than they were in theirs.

“I thought we scored a great early goal, Sean (Maguire) couldn’t have done any more with his header that would have made it 2-0, and then Scott (Sinclair) really should score.

“If we’d taken those opportunities, we’d have been more comfortable, and we spoke at half-time about getting the next goal.

“We were determined not to rest on our laurels, it was important to get the next goal, and it’s a really well-worked move to make it 2-0.

“We weren’t getting to the ball quickly enough, and Wigan started to apply a bit of pressure.

“Obviously when balls are coming into your box, all it takes is one good cross, or for somebody to get across the front of somebody.

“I thought if they were going to equalise, it was going to come from a set-play, but we deserved to win the game.”

For Wigan manager Paul Cook, it was another case of two steps forward and one step back.

After back-to-back wins over Sheffield Wednesday and Leeds, Wigan were off the pace right from the off as they blew the chance to move out of the bottom three.

“I thought in general it was as flat and as poor as we’ve been for quite a period of time.

“We didn’t have enough players winning their individual battles all over the pitch.

“And it took until the last half an hour, for the kid (Gelhardt) to come off the bench, to provide a real spark.

“We then huffed and puffed and probably took a semblance of credit from the game with all honesty.

“But the game had gone away from us by their second goal just after half-time.

“Great credit to Preston, I thought they were better than us for long periods of the game, and in my opinion deserved their win.”