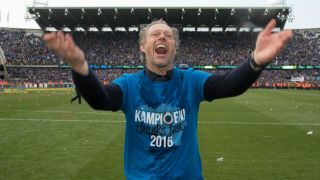 Club Brugge boss Michel Preud'homme has ruled out taking over from Marc Wilmots as the head coach of Belgium.

Wilmots was relieved of his duties on Friday in the wake of a disappointing 3-1 Euro 2016 quarter-final defeat at the hands of Wales.

Preud'homme, who won 58 caps as a player, had emerged as one of the favourites for the role, along with former Manchester United manager Louis van Gaal.

But the 57-year-old says he has made a commitment to Club Brugge that he does not intend to break.

"I promised to stay with Club Brugge and I'm going to keep my word," he told Sporza. "I'm staying at Club Brugge. Full stop.

"It's not the first time I've been linked with the national team, but I'm not a free coach."

Preud'homme, who took charge at Jan Breydel Stadium in 2013, guided his side to the Pro League title last season.