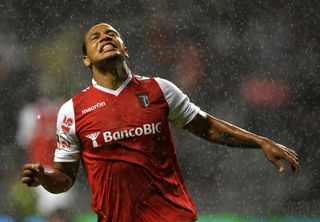 The visitors took the lead after just four minutes when Colombian attacker Felipe Pardo netted his eighth goal of the campaign in spectacular fashion.

Pardo collected the ball in space, teasing the home defence before cutting inside onto his left foot and unleashing a curling effort from just inside the area that flew beyond goalkeeper Ricardo and into the top corner.

However, the hosts responded well and found a leveller after 31 minutes thanks to a calamitous error from Braga keeper Eduardo.

The 31-year-old fumbled a left-wing cross from Diogo Valente, tipping the ball onto his own post and handing Brazilian midfielder Makelele the simple task of tucking home the rebound.

Neither team was able to find a winner, leaving them to settle for a draw that puts Braga three points adrift of fifth-placed Nacional, who occupy the final Europa League qualification place.

Academica are two points further back in ninth and have now drawn four of their last five matches.