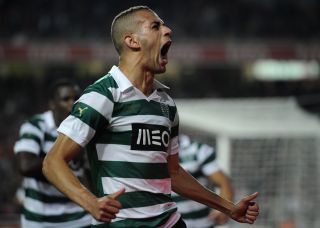 Bruno Amaro gave the hosts, who also finished with 10 men, a shock lead in the 15th minute to leave Sporting facing the prospect of going a third consecutive league match without a win and a suffering a first defeat in eight.

However, Marcos Rojo kicked off a revival for the men from the Portuguese capital when he found the net with a headed effort from a corner 11 minutes later.

Arouca's chances of holding on for a draw were dealt a blow three minutes after the hour mark when Tinoco was given his marching orders for a second bookable offence.

But Sporting suffered a setback minutes later when goalscorer Rojo joined Tinoco in heading for an early bath.

With conditions worsening at Estadio Municipal de Arouca, Sporting finally netted a winner in the 72nd minute as substitute Islam Slimani brought the ball down well in the area from an Adrien Silva cross, before smashing it beyond goalkeeper Cassio.

The victory sends Sporting one point clear at the summit, with second-placed Benfica set to play on Sunday.