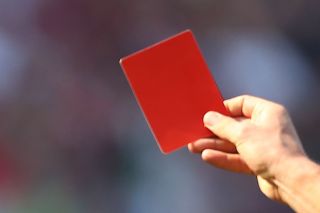 First-half goals from Brazilian duo Seba and Evandro handed the visitors the initiative, but they were down to 10 men before the break and Claudemir's penalty reduced the deficit.

Reginaldo levelled the scores four minutes after the interval, with Mexer given his marching orders for two bookings in quick succession late on.

Estoril took the lead with just four minutes on the clock, striker Seba ending a seven-game scoring drought with a volleyed finish.

His compatriot Evandro capitalised on Mexer's defensive error to make it 2-0 after 18 minutes.

Ruben Fernandes saw red late in the half when Djaniny went down in the box, with goalkeeper Vagner also in close attention, and Claudemir stroked home the spot-kick.

The turnaround was complete soon after the break, Reginaldo supplying the simple finish.

Djaniny spurned two presentable opportunities to secure all three points for the hosts, who saw Mexer dismissed following two poor challenges that were met with yellow cards in the 78th and 82nd minutes.