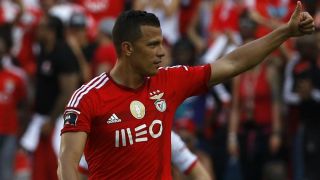 Lima scored twice to help Benfica to a 4-0 victory at home Penafiel, condemning their visitors to relegation on Saturday.

The Brazilian striker netted in each half as Benfica made it six league games without defeat, while moving six points clear of rivals Porto, who face lowly Gil Vicente on Sunday.

But it will be second-tier football next season for Penafiel, who needed to take something from the match to keep their slim survival hopes alive.

Fellow Brazilian Jonas doubled the home side's lead on the half-hour mark, with a composed finish from just inside the area after being played in by Eduardo Salvio.

Pizzi curled a low shot into the bottom corner of the net in the 60th minute, before Lima pounced on a poor back pass to round the goalkeeper and complete the scoring two minutes later.

Maritimo were the only other team to win on Saturday, accounting for fourth-placed Sporting Braga 3-1.

The scores were level at the break, but second-half goals from Danilo Pereira and Moussa Marega helped Braga end a run of three consecutive draws.