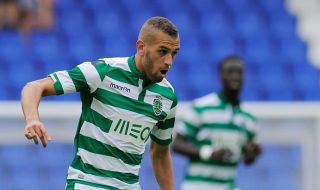 Both sides came into the clash at Estadio da Luz yet to taste defeat in the early stages of the 2014-15 Primeira Liga campaign, and the pair's unbeaten records remain intact after Sporting's Islam Slimani replied after Nicolas Gaitan's early opener.

The draw means that only Vitoria Guimaraes and Porto have a perfect record after three games each, although Rio Ave have recorded two wins from two and are set to take on Boavista on Monday.

Porto maintained their 100 per cent success rate this season with a comfortable 3-0 victory at home to Moreirense.

The hosts were frustrated for much of the encounter at Estadio do Dragao, with Oliver Torres' opener not arriving until the 70th minute.

From that point, the resistance of newly-promoted Moreirense crumbled as Jackson Martinez netted twice - in the 82nd and 87th minutes - to take his league tally for the season to four.

At the wrong end of the table, Penafiel remain pointless after a 1-0 reverse at home to Pacos de Ferreira.

Cicero struck the only goal of the game 11 minutes from time while Penafiel, promoted from the second tier last season, were reduced to 10 men for the remaining six minutes when Joao Pedro was sent off.

Gil Vicente are another side awaiting their first point following a 2-1 defeat at home to Maritimo.

The hosts had gone ahead through Diogo Valente in the 25th minute, but second-half strikes from Patrick Bauer and Moussa Maazou saw Maritimo prevail in a feisty encounter that saw 11 players cautioned.