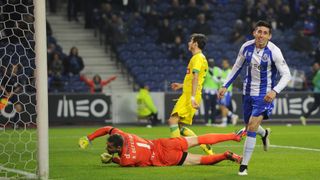 The home fans were treated to a brilliant performance by Porto at the Estadio do Dragao with Quaresma unleashing a strike with the outside of his right boot just before half-time, while Tello wrapped up the win with a curling dead-ball effort with seven minutes remaining.

The victory took Porto to 43 points in Portugal's top division, six behind leaders Benfica but, importantly, one ahead of Sporting, who had defeated Arouca 3-1 earlier on Sunday.

Sporting's sixth consecutive triumph had put the pressure on Porto but Julen Lopetegui's side responded in impressive fashion, a week after their shock 1-0 loss at Maritimo.

It was 2-0 five minutes before half-time when Quaresma converted from the spot, while the winger produced a moment of magic in the 44th minute - cutting in from the right before curling a shot with the outside of his foot that struck the join of the far post and crossbar to deflect into the net.

Martinez then set-up Porto's fourth goal just after the break, getting away from four defenders on the left side of the box before squaring the ball to Hector Herrera and the Mexican midfielder's back-heel beat Defendi.

In the 81st minute, Pacos de Ferreira were reduced to 10 when Marcos Romeu received a second yellow for a foul on Martinez, while Tello struck two minutes later, curling the ball over the wall beyond Defendi's outstretched right hand.

In Arouca, the home side struck first against Sporting with David Simao scoring from the spot but the visitors were level at half-time thanks to Fredy Montero's goal on the half-hour mark.

Andre Carrillo put Sporting in front in the 62nd minute, while Tobias Figueiredo clinched the three points with 13 minutes left.

Rio Ave took advantage of Pacos de Ferreira's loss to move into sixth with a 2-1 victory over Estoril, while Vitoria Setubal came from behind to draw 1-1 at Gil Vicente.

Academica held Maritimo to a 1-1 draw.