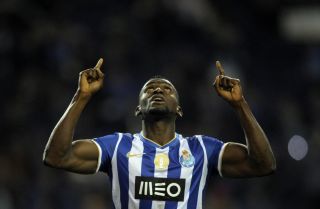 Benfica clinched the title on Sunday as they beat Olhanense 2-0 and with Sporting Lisbon on 66 points, all Porto could do was get a win to secure a third-placed finish ahead of Estoril, who are now a further eight points adrift.

Luis Castro – who has been in charge since March – named a strong line-up at Estadio do Dragao, but he was forced into an early change as Silvestre Varela limped off with an injury.

After a lacklustre first half in which there was an aura of carelessness following Benfica's title triumph, Porto finally took the lead just after the hour mark as Jackson Martinez won and converted a penalty.

Highly-rated right-back Danilo added a third for good measure in stoppage time, firing in a deflected effort from outside the area after Quintero played a short free-kick.

Monday's only other match saw Vitoria Setubal held to a 1-1 draw at home by Sporting Braga in a mid-table clash which had little impact on the top or bottom of the table.

The visitors got off to a good start as they targeted a win to move them up to sixth, with Eder opening the scoring for them after just 12 minutes.

Eduardo put their position in significant doubt 14 minutes later, though.

The Portugal international goalkeeper received a straight red card and although the numerically-disadvantaged Braga managed to hold on to their lead for a significant amount of time, Setubal eventually drew level through Pedro Tiba in the 80th minute.

Braga's failure to win means they can no longer finish in the top five, thus confirming their absence from the UEFA Europa League.