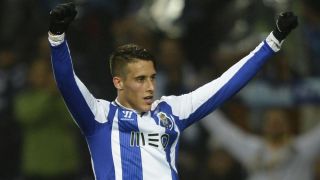 Cristian Tello produced a hat-trick for Porto in their fifth consecutive league win as Julen Lopetegui's men rose to 55 points, stretching their lead over third-placed Sporting (47), while they sit four points adrift of Benfica.

Tello's first-half opener was the pick of the goals at the Estadio do Dragao, with the Spaniard bursting onto an audacious volleyed backheel from Jackson Martinez, before finishing a one-on-one opportunity against Rui Patricio.

Sporting will head south after Sunday's loss knowing their title aspirations are effectively over with 12 points to make up on Benfica, plus eight on Porto, over their last 11 league matches and no games against the two clubs ahead of them.

After Benfica thrashed Estoril 6-0 on Saturday, Porto and Sporting started their clash aware a loss would severely hamper their chances of catching Jorge Jesus' defending champions.

Porto hit the front in impressive circumstances just after the half-hour mark thanks to Martinez's impressive assist and Tello's sharp finish.

Martinez set up Tello's second in the 58th minute as well, receiving possession in the centre of the pitch before turning out to the right before releasing his team-mate, who slotted the ball into the top corner of the net.

In the lower reaches of the standings, Academica rose above Vitoria Setubal thanks to a 1-1 draw with Arouca.

The two clubs just above the Primeira Liga's relegation zone switched places with Academica (19 points, minus 14 goal difference) claiming 15th position, while Setubal (19, minus 23) dropped to 16th after a 3-0 loss at Nacional.