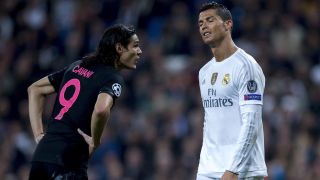 Paris Saint-Germain are favourites to progress from their blockbuster Champions League tie against Real Madrid, according to former Barcelona midfielder Xavi.

Madrid have endured a difficult campaign, sitting 19 points behind Barca in LaLiga, but are in the last 16 in the Champions League.

Zinedine Zidane's men are aiming to win the European crown for a third straight year and host PSG in their first leg on Wednesday.

"I think PSG are a spectacular team that are made to win the Champions League," he told RMC.

"But it is not good to face Madrid at the moment. It will be a very strong tie, although I think the favourite is PSG, because of their form.

"Everyone knows that Madrid has the DNA of victory and more in this competition. Sooner or later, PSG will win the Champions League.

"PSG is more favoured, but I am sure that Real will show their best."