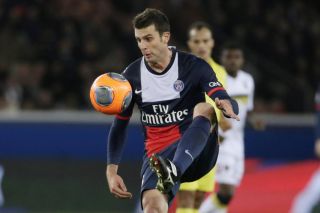 PSG comfortably beat their visitors 2-0 at Parc des Princes, with Lucas Moura and Edinson Cavani scoring the goals, but the Ligue 1 clash was marred by an incident as the players made their way to the dressing rooms.

Video footage showed Brandao waiting for Motta in the tunnel following the full-time whistle, with the ex-Marseille man appearing to headbutt the PSG midfielder in the face.

Motta, who was then held back by a host of team-mates and club staff, was subsequently shown with a bloodied nose and PSG revealed that what they described as an "assault" resulted in a broken nose for the Italy international.

Paris Saint-Germain president Nasser Al-Khelaifi had earlier called for Brandao to be banned for life.

Ibrahimovic's diagnosis following his 16th-minute substitution was a strain to his abdominal muscle, while Van der Wiel has suffered a fracture to one of his vertebra after receiving a knee to the back from Brandao.

No timescale has been put on the players' returns, but the news will undoubtedly come as a blow for coach Laurent Blanc.